Ruminations on “Cabin in the Woods” and Chocolate

I had a big day, yesterday. I went out for a movie and then went to a fabulous chocolate buffet. Yes, this is my idea of a big day. Before you get around to deciding whether to envy the excitement of my existence or feel sorry for me, I should explain.

The movie was Cabin in the Woods.

I admit, when I first saw the commercials for this film, I thought, “Oh, brother. Another cheesy slasher movie. Yawn.”

But then I noticed Chris Hemsworth is in it. “What the heck is he doing in a slasher movie?” I wondered. 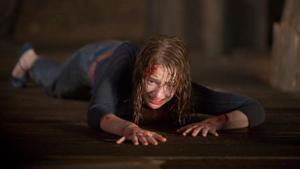 I decided they must have filmed Cabin in the Woods before Thor came along.  Once Hemsworth became all famous and popular, they decided to drag this movie out of some bottom drawer to exploit his fame. Hmph. Not even Chris Hemsworth is enough to get me to pay actual money to see a slasher movie. I didn’t give Cabin in the Woods another thought.

Then I found out Joss Whedon was one of the writers. Next chance I got, I plunked down $25 for popcorn, Coke, and a movie ticket.

Though I can’t say much about Cabin in the Woods without spoilers, I can say that this movie explains a lot. (Those who have seen it will know what I mean.) I can also say that it is indeed a cheesy slasher movie. But it is also a clever and dark bit of fun, and you should go see it. That is, if your mom says you’re old enough.

Is that enough for you? No? Well, those are just some of the things I ate.  There was a lot more to choose from than that.

Yes, you may envy me for my big day.

I love reading, writing, and editing speculative fiction of all sorts. My current focus is on writing contemporary fantasy, where I get to play god with characters from myth and legend. My Norse-based urban fantasy, Valknut: The Binding, is available at Kindle Books and other e-book retailers. You can find me at my blog (marieloughin.com) and on Twitter (@mmloughin).
View all posts by Marie Loughin →
This entry was posted in Ruminations and tagged Cabin in the Woods, Chocolate, Chris Hemsworth, horror, Joss Whedon. Bookmark the permalink.

12 Responses to Ruminations on “Cabin in the Woods” and Chocolate